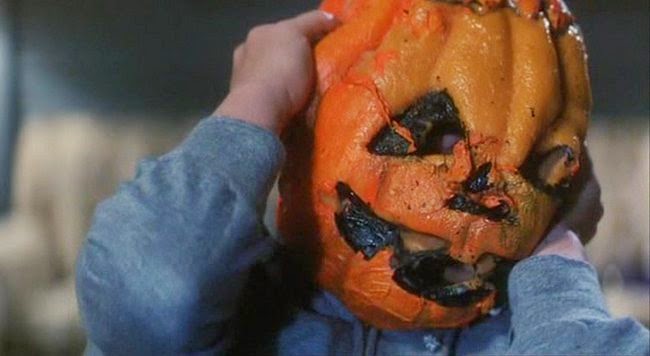 In 1978, John Carpenter's Halloween scared audiences everywhere.  And in 1982, Halloween II gave us more of "the night he came home".  But in 1983, the franchise gave us a sequel that is widely regarding as the "most hated" in the series (there's also a cult following that adore it), even more so than Halloween: Resurrection.  I give you Halloween III: Season of the Witch.

Breakdown:
Halloween III tells the story of a small town in Santa Mira, California that is home to Silver Shamrock Novelties, a large company that produces Halloween masks.  The company holds a dark secret as the head of SSN, Colonel Cochran, has a diabolical and morbid plan to kill every kid in America on Halloween night.  And how does he plan to do this?  All the masks that SSN produces have a little chip on them that will be activated when the company's line of television commercials air.

Unlikely hero, Dr. Dan Challis (played by genre fave Tom Atkins), takes it upon himself to solve this mystery and put a stop to the evil Colonel Cochran with the help of Ellie (Stacy Nelkin).

Oh, yeah, and Michael Myers is not in this movie.

My thoughts:
Simply put: I love this movie.  Yeah, it doesn't have Myers, so what!  This movie carries a great Halloween vibe and tells a fabulous story.  People always ask, "Why doesn't it have Myers?"  Well, the answer is simple: he died at the end of Halloween II.  If you've held out from seeing HIII because of the non-Myers factor, then you're doing yourself a disservice.  It's a fantastic movie!