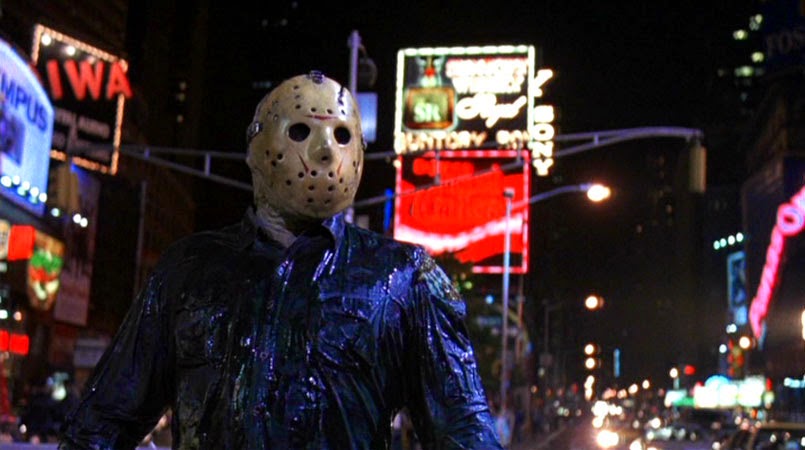 The Friday the 13th series was booming in the '80s.  The filmmakers developed a specific formula for the franchise that worked and kept audiences coming back for more: sex, kill, sex, kill and so on.  But 1989 rolled around and arguably the worst sequel of all time was released: Friday the 13th Part VIII: Jason Takes Manhattan.

Breakdown:
A cruise ship departs from the shallows of Crystal Lake and heads towards New York, carrying the graduating class of the local high school (Crystal Lake High?) for a senior trip they'll never forget.  There's just one small problem, Jason Voorhees has been resurrected and is aboard the ship.

My thoughts:
This is the worst and maybe the most interesting of the entire series.  The film is littered with flaws and continuity errors left and right.  But now, years later, it has become somewhat of the charm of the movie.  Kane Hodder is back to play Jason for his second go 'round, which was nice.  I dare you to not develop a crush on the main character Rennie, played by the gorgeous Jensen Daggett.

If you can deal with a poorly put together movie, an ending that is completely ridiculous and teleporting Jason, then you'll probably dig Jason Takes Manhattan.