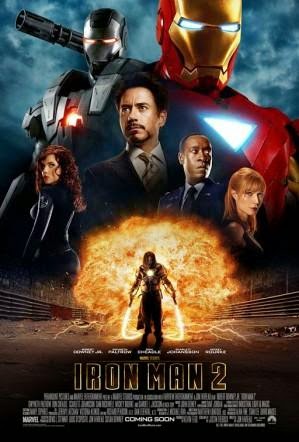 Marvel's cinematic universe has become delightfully expansive over the past several years. With so many films and intertwining story lines, it's difficult to think of any one project as a sequel to a single other one. Yet when it comes to ranking and comparing Marvel's films, it's interesting to look at them in the context of how each built on the film before it. In this regard, I'd argue that IRON MAN 2 may be the most underrated film in Marvel's arsenal. So, just for fun—and as a quasi-review of the forgotten Iron Man film—here are my five reasons why this might just be Marvel's greatest sequel.

1. The Return Of Tony Stark

With Robert Downey, Jr.'s Tony Stark, Marvel struck gold and introduced us to a character we simply couldn't get enough of. Have you ever wondered why Pirates Of the Caribbean films keep making money? Or why TV viewers came back for season after repetitive season of House? It's (likely) almost entirely because of the characters that carried the programs, with Jack Sparrow (Johnny Depp) and Dr. House (Hugh Laurie) demonstrating the same irresistible charisma that Downey, Jr. applied to Tony Stark. This is no reflection on the brilliance of the creators of IRON MAN 2, but rather just a stroke of luck with casting. Can anyone honestly say they were as excited to spend two-and-a-half more hours with Tobey Maguire's Spider-Man, Chris Evans' Captain America, etc.?

A few more hours with Tony Stark gave this sequel an enormous advantage. A while back, ScreenRant tackled the issue of who should really lead the Avengers in film, intelligently noting that comics and film are different animals (meaning that Captain America may not wind up the same leader on screen as he is in comics). The article places Iron Man at the bottom of the ladder. However, in terms of the box office draw and fan attention, it's safe to say he is the most important modern Avenger.

In my opinion, one look through the casts listed at IMDB is all you need to realize that IRON MAN 2 actually has a pretty strong edge on its predecessor in terms of the people involved. Sure, Jeff Bridges is a wonderful actor, and offers an enjoyable turn as Obadiah... and Shane Toub is a fine piece of the original as the amicable and helpful Yensin.

However, can the two of them stand up to the quirky brilliance of Sam Rockwell as Justin Hammer? Or the amusing but effective menace of Mickey Rourke as Ivan Vanko? Throw in the fact (or, OK, opinion) that Don Cheadle is a better Col. Rhodes than Terrence Howard and #2 simply has a better supporting cast than the original.

3. A Fitting (But Human) Rival

I'm not going to harp for too long on this one, but Marvel has already gotten carried away with its villains. A team of heroes can only conquer so many all-powerful villains before it just gets absurd. To that end, Rourke's Ivan Vanko is simply more enjoyable because he's just a human with a similar brilliance to that of Tony Stark. He's vulnerable and reckless but dares to go toe-to-toe with Tony Stark in a scientific way. Frankly, it's just more intriguing than some of the cosmically ridiculous villains we've seen in other Marvel sequels—I'm looking at you, Guy Pearce-powered-by-orange-zombie-dust.

4. An Impact On Gaming

This is another point that doesn't need to be elaborated on too much. That being said, it's an interesting indication that IRON MAN 2 was better appreciated than some critics and fans give it credit for. The unfortunate fact about Marvel and gaming is that they haven't exactly mixed well with the exception of a few solid Spider-Man console games over the years.

But those who follow comic books in other realms of entertainment may have noticed that both Marvel and DC frequently lend their characters and themes to the online casino gaming industry in coordination with film releases. And to prove that point, one only needs to see that the Betfair Casino is still hosting an IRON MAN 2 game. It's sitting on their site alongside more recent and modern releases—and it remains a popular choice. Perhaps it's just a random holdover, but I'd like to think it's an indication that at least gamers appreciate IRON MAN 2 the way I did (and do).

5. An Impact On The Series & Larger Franchise

Finally, there's also the crucial detail that IRON MAN 2 actually had a huge impact on the greater Avengers universe. To begin with, we see Tony Stark essentially stabilize himself with a greater energy source. This comes about after one of the most wonderfully absurd scenes in the entire Marvel universe, in which Stark literally creates a new element from scratch. Sure.

However, we also see Tony firmly established as the sort of rogue or loner among the Avengers when Nick Fury basically tells him he'll be used by S.H.I.E.L.D. but not become a part of it. At that point, we see the continued development of the Iron Man franchise in a more natural way than we've seen with some other characters. With Captain America, for example, it's awkward to watch a sequel because you're just wondering the whole time why no one's called the other Avengers. But with Iron Man, we're able to buy, at least somewhat, that he sort of does his own thing with his own team of allies. This is all thanks to development we see in the second film.

The article above was a submission.
Buzz'd Iron Man 2 Marvel RDJ Tony Stark