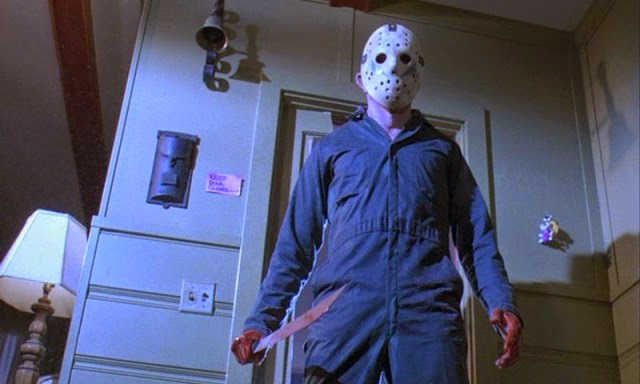 FRIDAY THE 13TH: THE FINAL CHAPTER was aimed to be the last in the franchise, Jason's final demise.  But that was not to be the case, tearing a page from the book of HALLOWEEN III, 1985 saw FRIDAY THE 13TH PART V: A NEW BEGINNING!

Breakdown:
10 years after killing the goalie hockey-masked killer Jason Voorhees, Tommy Jarvis has grown up in various mental hospitals unable to get over the nightmares about Jason's return. When Tommy is sent to a rural halfway house in California for mentally disturbed teenagers, a series of grisly murders begin anew as another hockey-masked killer begins killing off all people at and around the residence. Has Jason returned from the dead to re-start his killing spree? Has Tommy decided to take over the reign of Jason, or has someone else?

My thoughts:
Look, let's be straight with each other.  I love A NEW BEGINNING.  Love it.  Every bit of it.  It's everything the '80s slasher genre was about wrapped into one movie.  An obvious cash-in on the Jason character, but ultimately a secret fan-fave.