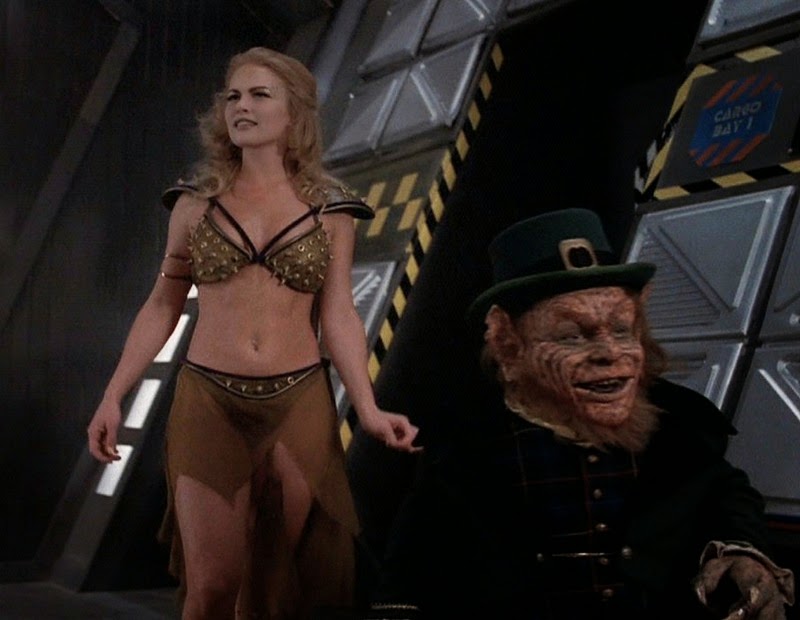 The world was first introduced to the pint-sized LEPRECHAUN in 1993, and after two sequels, it seemed that maybe the franchise had ran out of steam -- that is, until 1996, when that little bastard was shot into the cosmos in LEPRECHAUN 4: IN SPACE!

Breakdown:
On a distant planet, a power hungry Leprechaun kidnaps a Dominian princess, Princess Zarina, and plans to make himself king, but not if a bumbling brigade of space marines have anything to say about it. Their commander is a mad scientist by the name of Dr. Mittenhand, who's half machine thanks to one of his "experiments". Once on the planet, Leprechaun is blown up, but quickly is reborn through one of the marines (ala Alien) and wreaks havoc aboard the ship, meanwhile Dr. Mittenhand plans to use the princess for his experiments to make himself whole again. But now, after many of the marines are killed, Leprechaun turns Dr. Mittenhand into a grotesque monster and plans to blow up the ship. The remaining marines have to stop his evil plans and blow *him* up.

From Dylan Self on IMDb

My thoughts:
Hmm, where to begin.  Well, it takes place in space, obviously.  Although completely ridiculous, LEPRECHAUN 4, like JASON X, is a highly entertaining movie, thanks to Warwick Davis in his signature role.  I haven't seen this movie in quite a few years, so it may be time for a brush-up.