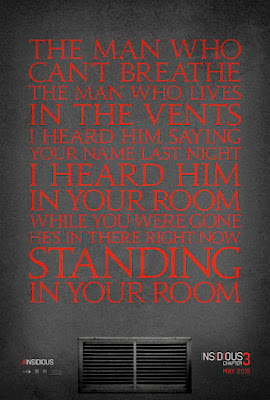 The story is interesting but isn’t as good as the previous installments. However... As clichéd as it is, it still will keep you interested throughout the entire film. With Chapter 3, Leigh Whannell takes over directing duties from James Wan, but is no where near as good a director as Wan. James Wan's style is old school Hollywood, Wan uses suspense, mood, and drama to create his brand of horror. Even when Wan broke into the scene with his first film SAW, he showed great strength in directing with his style. Leigh Whannell still has a lot to learn and must figure out his strengths and weaknesses when it comes to directing. Whannell does achieve the occasional visual shiver, but for the most part he relies too much on cheap gimmicky scares that is very much in trend with today's style of horror films.

Front and center this time is actor Lin Shaye and she is the film’s strongest asset. Lin Shaye is definitely having a great time as psychic Elise Rainier. In Chapter 3, Lin's character Elise is asked to help and rescue Dermot Mulroney’s daughter (Stefanie Scott) from evil, alongside Angus Sampson as Tucker and Leigh Whannell as Specs, who were all in the previous Chapters. It was interesting to see how they actually meet and it turns out Tucker and Specs do have a funny backstory as wanna-be ghost hunters. Otherwise the main cast in Dermot Mulroney and Stefanie Scott as the Brenner family just aren’t as great or as interesting compared to Rose Byrne and Partick Wilson playing the Lamberts in Chapter 1 & 2.