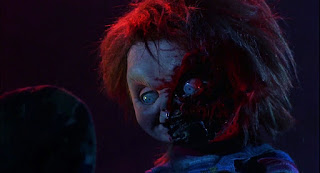 Holy hell!  A new Movie Sequel-a-Day post!  Shit, it's about time.  Today's sequel is one that has gathered its fanbase over the years, but has the good-fortune of being associated with one of horror's elite franchises.  This is 1991's CHILD'S PLAY 3.

Breakdown:
It's been eight years since the events in the second film, we now see that Andy is a teenager who has been enrolled in a military school. Play Pals Toy Company decides to re-release its Good Guys line, feeling that after all this time, the bad publicity has died down. As they re-used old materials, the spirit of Charles Lee Ray once again comes to life. In his search for Andy, Chucky falls into the hands of a younger boy, and he realizes that it may be easier to transfer his soul into this unsuspecting child. Andy is the only one who knows what Chucky is up to, and it's now up to him to put a stop to it.

From Phil Fernando on IMDb

My thoughts:
Growing up, this is the one CHILD'S PLAY film that I watched way more than the rest -- not that I think it's the best, but that it was the only one I owned (on a recorded VHS tape, no less).  So the nostalgia factor runs deep with this one for me.  And besides, how badass is that ending?!