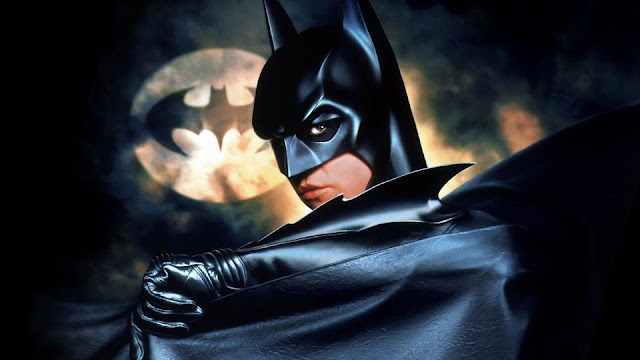 With all the Batman-related news lately, it's only fitting that today's sequel was the Caped Crusader's third outing.  A little dark and a little goofy pretty much makes up 1995's Batman Forever.

Breakdown:
The Dark Knight of Gotham City confronts a dastardly duo: Two-Face and the Riddler. Formerly District Attorney Harvey Dent, Two-Face incorrectly believes Batman caused the courtroom accident which left him disfigured on one side; he has unleashed a reign of terror on the good people of Gotham. Edward Nygma, computer-genius and former employee of millionaire Bruce Wayne, is out to get the philanthropist; as The Riddler he perfects a device for draining information from all the brains in Gotham, including Bruce Wayne's knowledge of his other identity. Batman/Wayne is/are the love focus of Dr. Chase Meridan. Former circus acrobat Dick Grayson, his family killed by Two-Face, becomes Wayne's ward and Batman's new partner Robin the Boy Wonder.

From Ed Stephan on IMDb

My thoughts:
I don't like BF.  I also don't hate it.  Honestly, it's a good blend of dark adult material and colorful, wacky stuff for the kids.  Not as good as Batman Returns, but miles better than Batman & Robin.