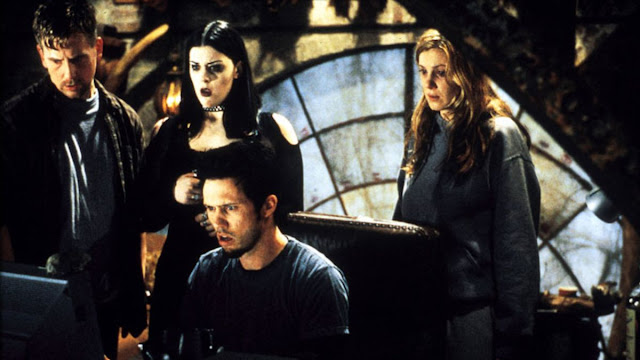 You know the story...three students filmmakers go missing in the woods of Burkitsville, Maryland while shooting a documentary and a year later, their footage was found.  And then a year after that footage was released to theaters a group of obsessed fans go into the woods and encounter some crazy shit.  This is 2000's Book of Shadows: Blair Witch 2.

Breakdown:
To cash in on all of the "real world" hype of the events in the first film, a man from Burkitsville, Maryland opens a "Blair Witch Hunt" tour, which shows patrons various locations from the original film. A bunch of college students decide to take the tour, and wind up in Rustin Parr's house. There, they decide to camp for the evening, but in the morning, they realize they didn't sleep and they don't remember anything that happened the previous night. From there, they go back to town, and discover that something...or someone has come with them.

From Johnny on IMDb

My thoughts:
I've made it pretty clear in the past that I'm a pretty big fan of BW2 (I just try to think of it more as a spinoff rather than a sequel).  It's a cool setup and a fun movie.