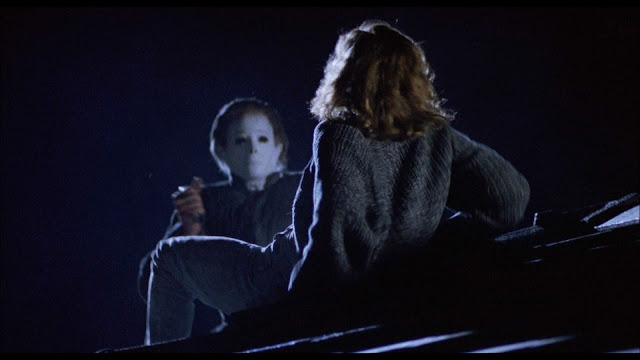 We're inching closer to October and I've had this movie on the brain recently, so today's Movie Sequel-a-Day is the horror genre gold standard on how to breathe new life into a dead franchise...this is 1988's Halloween 4: The Return of Michael Myers.

Breakdown:
It's October 30, 1988 and Michael Myers has been in a coma since his pursuit of Laurie Strode, 10 years ago, was finally stopped (events of H1 and H2). However when he is transfered from Richmond Mental Institute to Smith's Grove he awakes when he hears that he has a niece in Haddonfield and after killing the transfer crew he escapes. In Haddonfield, the niece, Jamie, has been adopted by the Carruthers family but keeps having nightmares about Michael (but she doesn't know who he is). On Halloween night, Jamie goes out trick and treating, little knowing that her murdering Uncle is following her and her step-sister Rachel. Rushing to her aid is Dr. Loomis and with the help of Sheriff Meeker starts to search the town for Michael and to find Jamie to protect her. But can anything stop Michael this time?

From Lee Horton on IMDb

My thoughts:
It's a wonderful little gem.  It captures the mood and feeling of a midwestern October almost perfectly.  And though I love Halloween III to pieces, this is just what the franchise needed to return from the grave!

Halloween 4: The Return of Michael Myers