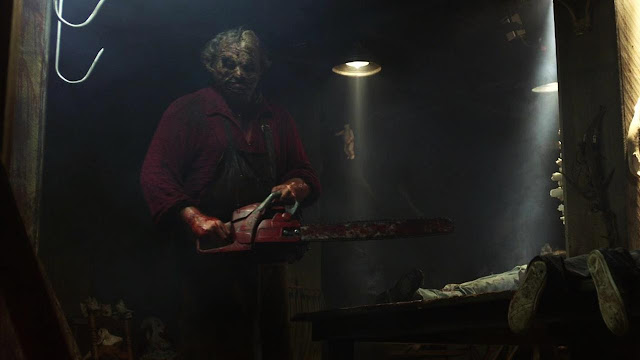 We're keeping today's Sequel-a-Day in the Texas Chainsaw Massacre family, and this one created a new dimension for the series.  A third dimension.  Naturally I'm speaking about 2013's Texas Chainsaw 3D.

Breakdown:
After the first massacre in 1974, the townspeople suspected that the Sawyer family were responsible. A vigilante mob of enraged locals surrounded the Sawyer house, burning it to the ground and killing every last member of the family. Decades later, a young woman named Heather learns that she has inherited a Texas estate from her grandmother. She decides to bring her friends along on the road trip to investigate her inheritance. On arrival, she discovers she has inherited a mansion, but is yet to uncover the terrors that lurk in the basement underneath it.

From Tom Thomas on IMDb

My thoughts:
TC3D is such a love-letter to the fans.  From the initial teaser poster which featured various masks from previous TCM movies (hello, Next Generation cover mask!) to the opening sequence, everything was fantastic and handled with such care.  The labor of love put into the film allows me to accept the filmmaker's attempt to smudge the timeline a little.