UNBREAKABLE Trilogy Talks, From 17 Years Ago 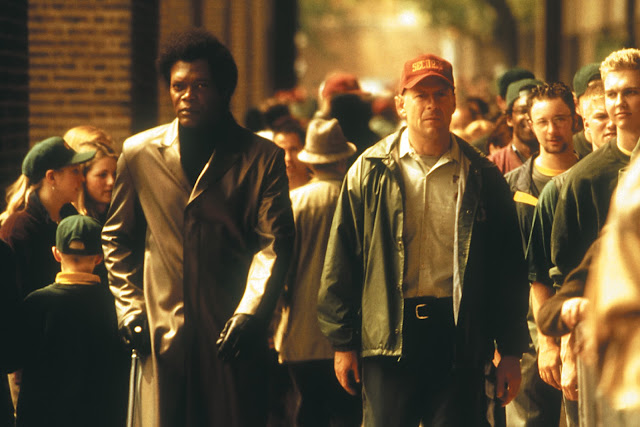 With the third entry in the Unbreakable trilogy, Glass, underway now, it seems fitting to a take a look back and see what the ole rumor mill looked like in late 2000, when co-stars would go online and make outrageous claims.

Here's how that went down...

On November 6, 2000, Bruce Willis took part in an online chat over at Yahoo!, and user "GreenHornet" asked the question:


So Mr. Willis do you have any other films in line with M. Night Shyamalan? (or you rather not say)

And Willis, as "bruce_willis_live", responded:


Unbreakable is the first part of a trilogy of films.

I can’t tell you about the others...

But we're supposed to do two more.

you’ll understand how it lends itself to a continuing story.

Interesting, to say the least.


"Meanwhile, Willis and Jackson are pushing for an Unbreakable sequel – maybe two. 'It's really built to be a trilogy,' Willis believes. But Shyamalan is noncommittal; he's busy noodling around with a couple of other original screenplay ideas. "I can’t tell you anything about them," he chants, mantra like."

But then, on December 5, 2000, all hopes seemed to be squashed, M. Night threw down the hammer after Willis' and Jackson's rumblings via Total Film Magazine:


“Bruce Willis may still not be seeing dead people, but he is seeing sequels that don’t exist. Despite Willis’ internetty claim that his new movie, Unbreakable, is the first of a trilogy, writer-director M Night Shyamalan says the star is getting ahead of himself…

‘Whether there ever is another one is not really on my mind,’ The Sixth Sense helmer told Total Film. ‘I don’t have a story, I’m not thinking about it, and if I ever made one, it would be for the right reasons. Not for money, not to cash in, and certainly not because my next two films flopped or anything like that.’

But, for the time being, Unbreakable’s story of the changes surviving a trainwreck force on a man will remain a one-off collectors’ edition. ‘Unbreakable is about ‘Am I what people say I am? Am I something exceptional or a very ordinary person?’ Shyamalan said. ‘There’s a lot of me in the story, and if I find an emotional reason why these two characters could come alive again, I’ll do it.'”

And that's pretty much where all Unbreakable sequel/trilogy talks stopped...until recently when Split hit theaters and provided that super-awesome end-scene.

So here we are in late 2017, and the third entry, Glass, is just over the horizon.
Glass M. Night Shyamalan Sequel News Split Unbreakable