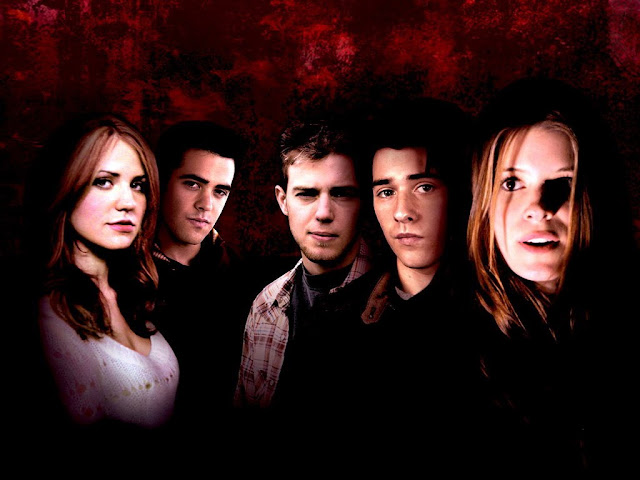 Today, we take a look back at a sequel that sort of came out of nowhere.  Four years (seemed a lot longer) after Urban Legends: Final Cut, we got a direct-to-video sequel in the UL franchise that took a step back from the teen slasher sub-genre and into the realm of the supernatural.  This is 2005's Urban Legends: Bloody Mary.

Breakdown:
On Homecoming night, Samantha, Gina, and Mindy are having a slumber party at Sam's house due to being black-listed by the sexy football players. Since the dance and game are out of the question, the trio stays up and entertains themselves with Urban Legends..all leading up to BLOODY MARY. With nothing better to do and a whole night to waste, Sam chants "Bloody Mary." Her friends laugh... "Bloody Mary." More laughter. On the third and final "Bloody Mary," the friends are kidnapped by three jocks and return soon thereafter, shaken but well. Sam begins having hallucinations and soon bodies turn up - is it all a high school prank taken to grisly extremes or is it Bloody Mary, who's youth was taken far too early?

My thoughts:
Admittedly, I wasn't a fan of UL3 when it was released.  But it's slowly grown on me over the years.  There are a few coincidental parallels between this and Final Destination 3, but it's all good.  Can we get a UL4 now?