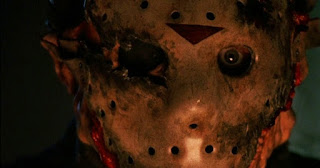 Breakdown:
The secret of Jason's evil is revealed. It is up to the last remaining descendant of the Voorhees family to stop Jason before he becomes immortal and unstoppable. This is the final (?) battle to end Jason's reign of terror forever.

From Michael Silva on IMDb

My thoughts:
Back in the day, I absolutely hated JGTH.  But as time has passed and after a few more viewings, the film has definitely grown on me.