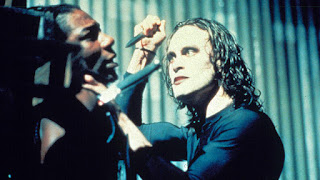 It's been a couple year, so here we go.  Sony has landed the distribution rights for The Crow franchise.  And we're getting The Crow Reborn.

From The Tracking Board:

In what would be a major coup for Sony Pictures, multiple sources have told the Tracking Board that the studio has signed on to distribute THE CROW REBORN worldwide.

While it’s a bit unclear whether Jason Momoa and Corin Hardy remain attached to respectively star in and direct the film, insiders suggest both men are still part of the studio’s plan, as both are on the rise. Next year, Momoa has Aquaman coming out, while Hardy has The Conjuring spinoff The Nun.

The Crow Reborn will be a reboot of the cult classic franchise as well as a more faithful adaptation of the original graphic novel written by James O’Barr.

There you have it: some sort of solid news for a new Crow movie.
Remake News The Crow Reborn