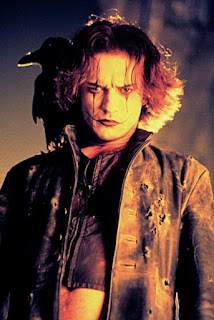 Today's sequel comes off the heels of the news of the new Crow reboot/remake.  I always refer to this one as the unnecessarily necessary sequel.  This is 1996's The Crow: City of Angels.

Breakdown:
Some time ago, Ashe Corven and his son Danny were killed when they stumbled across a pack of drug dealers murdering a fellow dealer. The dealers work for Los Angeles drug kingpin Judah Earl. Local tattoo artist Sarah, who has great knowledge of the crow legend because of what happened with her late friend Eric Draven, has been having dreams about Ashe and Danny. One night when a crow leads her to the scene of the murders of Ashe and Danny, Ashe appears before her. The crow has resurrected Ashe, so Ashe can go after Judah and his right hand man Curve. With the guidance of the crow, Ashe starts killing off Judah's men one by one, on his way to Judah.

From Todd Baldridge on IMDb

My thoughts:
I was young enough when City of Angels was released to not realize that it was a total cash-grab afte the death of Brandon Lee.  So, needless to say, I like Crow 2.