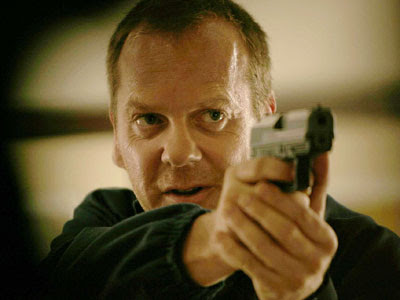 According to star Kiefer Sutherland (Jack Bauer), the much-anticipated 24: The Movie will be lighting up movie theaters in 2012.

We’re holding our breath, Jack Bauer: Kiefer Sutherland told the women of The View this morning that the much-anticipated release of the 24 movie will be in (drumroll please) … 2012.

Hey, there’s no reason NOT to believe Sutherland (who was on the show to promote his Broadway play That Championship Season). Still, EW hears that the movie has yet to find a director and has no start date. I guess we should stay tuned.

Sutherland told EW earlier this year that he remains committed to a big-screen version of the Fox drama and, in fact, hopes to begin production within a year. Though Fox ultimately nixed a script by Billy Ray (State of Play), the movie remains “the little engine that could.” He acknowledged that 20th Century Fox has been working with director/producer Tony Scott (Man on Fire, The Good Wife) on the project. “Billy did a fantastic job and there are aspects of that story [that will remain],” the actor says. “I couldn’t be more thrilled.”

What do you think, Bauer fans? Will you believe it when you see it?

Thanks to Entertainment Weekly for the scoop.