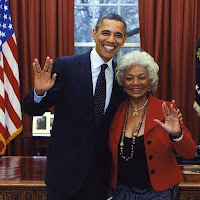 This is how you know it's a slow news day -- when we're posting about President Obama mistaking Star Trek and Star Wars.

Still funny if you're a Trekkie or a Warsie...


Fanboys may want to pull President Obama’s film geek credentials. He appeared Friday in the White House briefing room talking about budget cuts and said he wouldn’t do a “Jedi mind-meld” with the top two Congressional Republicans. Of course, the correct term is “Vulcan mind-meld”. Tweeted a Jedi fanboy group: “We forgive President Obama for the #JediMindMeld mistake. After all, with JJ Abrams now with a foot in both camps, being a geek is tough.”