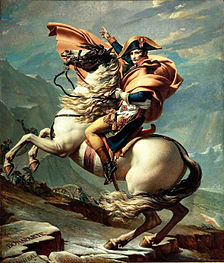 Though Stanley Kubrick wrote a screenplay for Napoleon back in 1961, it may finally see the light of day in a Steven Spielberg-produced TV mini-series.


It was a screenplay first written by Stanley Kubrick back in 1961 and now Steven Spielberg says he’s working with the late filmmaker’s estate on the project. “I’ve been developing Stanley Kubrick’s screenplay, for a miniseries not for a motion picture, about the life of Napoleon,” Spielberg recently told the French TV network Canal+. Kubrick left behind extensive research archives - location photos, notes and boxes of other details which provided a book on the subject. But studios balked at the expensive project. (Kubrick eventually made Barry Lyndon which takes place 15 years before the Napoleonic wars.) Spielberg’s 2001 A.I. began as a Kubrick project. The Napoleon news comes after Spielberg delayed Robopocalypse. Recently named jury president for the Cannes Film Festival in May, he’s producing Jurassic Park IV in 3D for June 2014, and developing another HBO series with Tom Hanks. Still pending is whether he’ll take on the Moses epic Gods And Kings for Warner Bros.