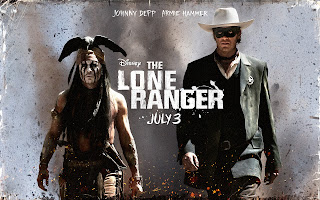 Director Gore Verbinski and actor Johnny Depp team up again for the big screen adaptation of the classic radio and TV series The Lone Ranger. Johnny Depp plays Tonto, the so-called “Noble Savage” who tells the untold tales of John Reid, played by Armie Hammer of The Social Network, who would later become the masked man of justice The Lone Ranger.

As the film starts out, a young boy who is at an exhibition lays his eyes upon the “Noble Savage”. The Indian (later revealed to be the older Tonto) begins to tell him the story of a masked man because the boy took his mask off. “Never take off the mask” Tonto tells the young boy. When we flashback, we see the younger Tonto chained up and on a train ready for death. With Tonto is Butch Cavendish, played by William Fichtner, who is a repulsive thug with a silver tooth and a lip cut upward who later becomes the target of Reid’s aggression. Tonto later reluctantly recruits Reid, who he bills “the wrong brother” because he wanted John’s brother Dan as Dan is a great warrior but the spirit horse told him otherwise.

The film is mainly a revenge story where Reid wants to kill Butch for killing his brother and Tonto wants revenge as well for having his tribe killed by two white men when he was a young boy. While new characters do come along the way, you don’t really care for them. At 2 ½ hours, the film gets slow and feels like it drags on at points especially in scenes where Depp and Hammer are not onscreen.

The action set pieces are vastly scattered throughout the film and feel reminiscent of something from a Buster Keaton film involving lots of trains and horses, as you’d expect. But what makes the action scenes fun is the presence of Hammer and Depp in their respective roles. The stunts in this film, while there are obvious green-screen effects, are exciting and engaging although the amount of standoffs where the bad guy has the good guy right where they want them and they just start talking instead of killing them does get annoying.

It’s impossible to take your eyes off of Depp, who speaks his lines with such deadpan delivery that it’s hard not to laugh when he says lines like “Bad trade” and has stone-like facial expressions through that black and white face paint. In addition, that bird on his head is a sight gag that never gets old. Armie Hammer, playing the straight faced character, also holds the screen tight with every second he holds a presence. While Johnny Depp’s Tonto can be considered the toughest character to sell, you can make the argument that if Armie Hammer wasn’t believable enough as John Reid, then the film would fall apart and he mostly succeeds in convincing you that he was the man for the job. When The Lone Ranger theme song, Rossini’s “William Tell Overture” comes on, it’s hard not to bob your head and hum along and Hans Zimmer does his own rendition of the classic theme song.

While nowhere near perfect, The Lone Ranger is a fun ride and is a great summer spectacle. Hi-Yo, Silver! Away!
Reviews