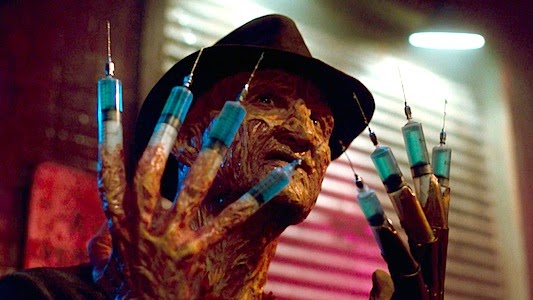 In 1987, Wes Craven returned to the Elm Street series with A Nightmare on Elm Street 3: Dream Warriors.  Although Craven didn't direct, he played a major role in developing the story and writing the script.  This is also the second installment in the unofficial Nancy trilogy (ANOES1 and New Nightmare being the first and last).

Breakdown:
A group of young adults at Westin Hills, a psychiatric hospital, start dreaming about the Springwood Slasher, Freddy Krueger.  It is revealed that the kids are the last remaining group of the original Elm Street children.  Returning to the series is Heather Langenkamp as the feisty Nancy who refuses to let Freddy win.  With the help of a fellow doctor on staff, they must unlock the secret(s) that will finally put an end to the reign of Krueger.  Interesting tidbit: the kids at Westin Hills learn that, when in their dreams, they can have unlimited powers -- hence the subtitle Dream Warriors.

My thoughts:
Where do I begin?  I first saw this movie when I was in junior high and instantly fell in love with it.  Although this is the one where Freddy began to show signs of comedy, it wasn't over-bearing.  Freddy was more less a sadistic sonofabitch this time around (many of the kids had clear signs of mental and/or physical disabilities).  I also didn't mind that this entry basically disregarded A Nightmare on Elm Street 2: Freddy's Revenge and was pretty much a direct sequel to the original.  Oh, yeah, and the Dokken "Dream Warriors" music video in the end credits is simply FANTASTIC.