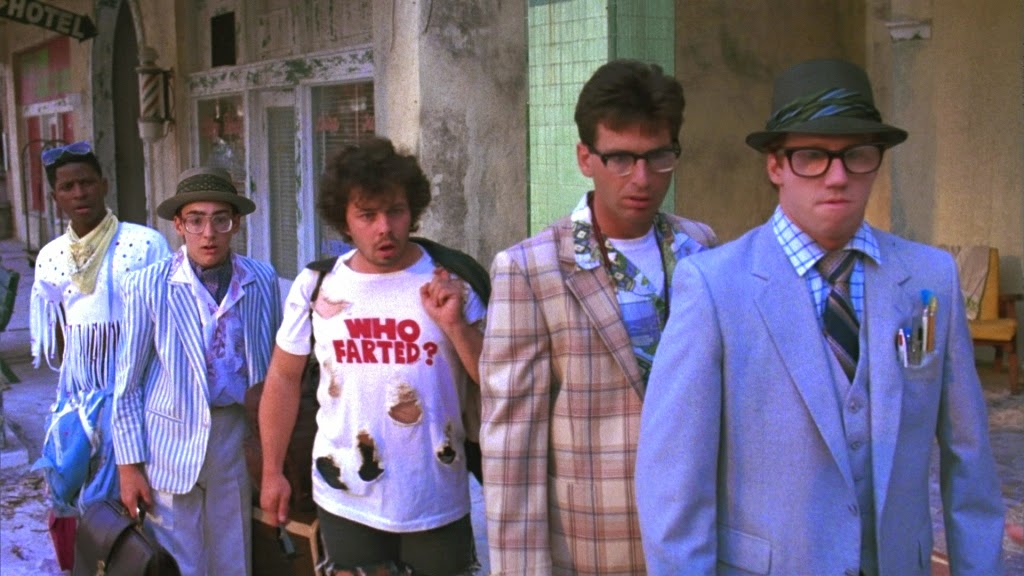 Believe it or not, Revenge of the Nerds essentially mapped out a formula for most of, if not all, college-based movies from there on out.  Lesser fraternity has to go to some sort of battle against the better fraternity to remain in existence.  It's been duplicated in Old School, Monsters University, American Pie Presents: Beta House and a slew of other college films.  As for 1987's Revenge of the Nerds II: Nerds in Paradise, it's sort of more of the same, but with a tropical setting.

Breakdown:
Revenge of the Nerds II tells the story of the Tri-Lambs, who are invited to a national fraternity conference in Florida, but are not welcomed by their foes, the Alpha Betas.  Most of the original cast is back in action for the sequel, and even a few surprises like an Alpha-Beta turning Tri-Lamb (this was sort of homaged in Accepted).  Like the first film, the Tri-Lambs must rise against and prevail.

My thoughts:
I was introduced to the Revenge of the Nerds series at a young age by my uncle.  I didn't get most of the jokes but I knew a good comedy when I saw it.  But when I saw the sequel, my first reaction was just a great big yawn.  There really wasn't anything new, except for the lovely Courtney Thorne-Smith, who I absolutely fell in love with in Summer School.

If you're a completionist like me, then see it.  Otherwise, well, do what you want.