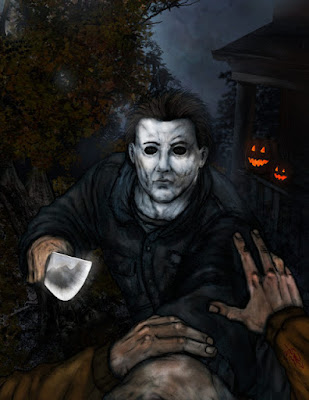 I don't know about anyone else, but I'm ready for another Halloween film.

As usual, talk and speculation of a new Halloween has been on form this year, since last year, with several sources saying various different things. But it looks like the movie could finally be making some headway into production…

“It’s been a joy to work with so many creative people – ten films,” Akkad said of the franchise’s longevity. “We’re working on eleven as we speak. We’re working on a script right now. A new draft – perfect timing – is supposed to hit the day before Halloween. Hopefully my Halloween night reading will be a good read.”

Akkad never gave any information on who is wrote the new script. Sources now (2015) claim that there is in fact a new script that has been written but is currently going through rewrites. With these Halloween films, it's very common for the screenplays to go through various drafts with multiple writers. What is still unknown is, whom wrote the original draft of the screenplay and whom is rewriting it. Rumor is that the Next Halloween film will be a sequel to Halloween Resurrection, and not Rob Zombies Halloween II.

The last time we saw Michael Myers on the big screen was Rob Zombie’s Halloween II in 2009, which made $40 million worldwide despite the poor reviews and reception. There was a period in time where we were going to get Halloween 3D, it had a screenplay written by Patrick Lussier and Todd Farmer, Patrick Lussier was expected to direct. It was intended to be a sequel to Rob Zombies Halloween II. For whatever reason, the Weinstein Company put the project on hold.
Halloween Hot Reboot News Sequel News The Horror Hive